Ways to do live polling (aka ConcepTests) during class

Has anyone tried live polling during (in-person or remote synchronous) class? I was planning to use Poll Everywhere, but they don't allow for long questions containing code. There's a new service called ItemPool that does allow this, but is missing advanced features like LMS integration, PowerPoint/Keynote/Google Slides integration, etc. Wondering if anyone has experience or advice. Here's a sample question:

What is the value of y after executing the following code:

Thanks for the great ideas!

I've realized my wish list (LMS integration, code formatting, autograding and export, support for mobile devices so I can reuse once we're back in person, free) is unreasonably long.

I may give up on tracking participation for a grade - this will allow me to simply post the question on a slide, and collect simple A/B/C/D responses any number of ways: Webex polls, Poll Everywhere (free account), ItemPool (which has code formatting), etc.

If the questions live in my slides rather than hardcoded into a specific platform, it should be less work to switch platforms in the future. And I'll have greater control over the look so I can include formatted code, equations, etc.

My students are all on a Discord server with me, so when it comes time for polling, I hijack the reaction system in Discord to get it done.

One nice feature is that it does syntax highlighting for any language that you specify, and you can also install mathjax on your server if you'd like to be able to represent mathematical functions. Here's a question I polled recently. The question itself is quite a lot of fun, and is from Java Puzzlers by Bloch and Gafter:

This outputs in Discord as: 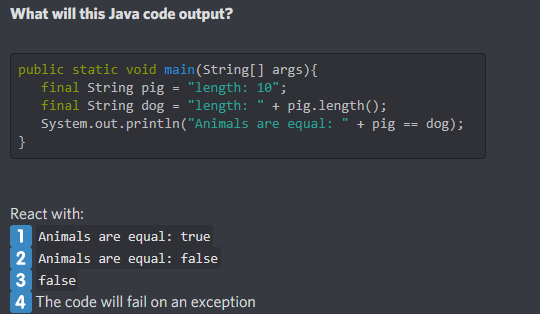 Students then react with one, two, three, or four.1

It doesn't allow reactions to be hidden, so if this is an important feature to you, then I would look elsewhere.

I've also found it useful for getting a sense of where my students are in an activity when they go to breakout rooms to work in pairs or trios:

This is very informal polling, but you can see how useful such information can be during virtual instruction.

I have the same ambition, but also the same problem - there isn't a single tool that fits all my requirements. So I ended up showing the questions as a set of slides (I write these in a markup language) and use Mentimeter for collecting answers - without copying the question and answers into Mentimeter. I use a generic set of "Question 1 - option 1, option 2... Mentimeter slides that I reuse each time I need it, which is most weeks of my semester long course.

An advantage of Mentimeter is that it allows you to hide results first, then show the tally of votes, without having to indicate what is the right answer. A disadvantage is that the free account is limited (my institution has provided a license).

I don't want to be seen as endorsing any particular product, and also suggesting something that I myself have not used or tried, but in order to pass on another experience point I might have to do that. You were specifically asking for some experiences from other places.

My colleagues speak highly of Mentimeter for this use in live lectures, both in person in the lecture theatre (whether it be hundreds or dozens of students) or what we do now, using online teaching (with MS Teams, as it happens).

We also use Discord, but we do not use Discord so much for synchronous teaching communication. I am told the the experience is better with Mentimeter. Personally I'm still a primitive and I collect the 👍 in the Teams chat which does enough for me!

But your mileage may vary.