I am looking for books on computers, in a now special sense:

Once I have read an article that in 1950, obviously the second meaning existed only in the Oxford Advanced Dictionary.

Now, do you know a good book on these people before the advent of electronic computers. using pen and paper?

It isn't a textbook, but Hidden Figures is both a book and a movie.

The same author, Margot Lee Shetterly, produced versions of the book both for adults and for young readers. The movie is quite uplifting. I haven't read the book, but assume it is the same.

History.com has an article about these remarkable women.

One of them: Katherine Johnson died this year. She is featured in the movie.

It is not clear to me what exactly OP is looking for, but one relevant book is: David Alan Grier, "When Computers Were Human", Princeton University Press 2005. The author served for several years as editor in chief of the IEEE Annals of the History of Computing. He was inspired to work on the book when he learned that his grandmother had graduated with a degree in mathematics in 1921 and that some of her fellow female graduates went to work as human computers. The book covers about two centuries between the 1760s and the 1960s.

In June 2005 Grier gave a lively hour-long presentation at the Computer History Museum also entitled "When Computers Were Human", a video recording of which is available on YouTube.

One large early project, directed by Gaspard Riche de Prony, that ran from about 1790 to 1801 is described in I. Grattan-Guiness, "Work for the Hairdressers: The Production of de Prony’s Logarithmic and Trigonometric Tables", Annals of the History of Computing, Vol. 12, No. 3, Jul. 1990, pp. 177-185. The title makes reference to the following fascinating detail:

These calculations were done by the third section, a large team of between 60 and 80 assistants. Many of these workers were unemployed hairdressers: one of the most hated symbols of the ancien regime was the hairstyles of the aristocracy, and the obligatory reduction of coiffure “as the geometers say, to its most simplest expression” left the hairdressing trade in a severe state of recession. Thus these artists were converted into elementary arithmeticians, executing only additions and subtractions.

A key personality in the final phase of the history of projects involving human computers was the mathematician Gertrude Blanch (1897-1996), described in David Alan Grier, "Gertrude Blanch of the Mathematical Tables Project", IEEE Annals of the History of Computing, Vol. 19, No. 4, Oct.-Dec. 1997, pp. 18-27, as follows:

Gertrude Blanch can be viewed as either the last and most important leader of human computers or one of the first numerical analysts for electronic computers. From 1938 to 1948, she was the technical director of the Mathematical Tables Project, the largest and most sophisticated of the human computing groups.

Got a lovely cover... alternatively any textbook on computing with a publication date of 1939 or earlier. 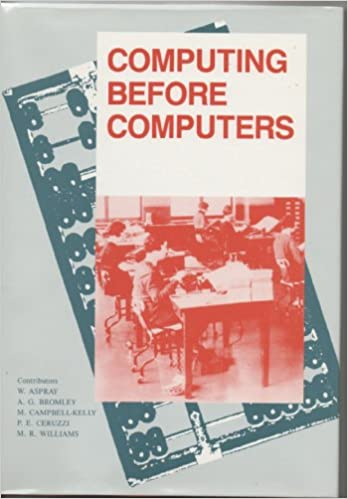 There's a chapter in Richard Feynman's autobiography, Surely You're Joking Mr. Feynman in which he describes* writing a "program" for a roomful of human computers and, what it looked like when they were "executing" it.

* Describes at a pop-science kind of level. It's not an instruction manual.

13
What are the merits of including the history of computers in the entry level curriculum?
4
Book recommendation: basic, broad and solid overview for advanced learners
4
Study the book "Computer Architecture- A quantitative approach" (3rd Edition) for the first time
2
Book recommendations for self studying Data Structures in depth in an elegant manner
3
Problem book for Haskell course
5
Book to substitute "Compilers: Principles, Techniques and Tools" by Ullman et. al. (popularly known as the red dragon book)
1
Help identifying a '90s CYOA-style book with BASIC code listings