Is it possible to teach selection (`if`) before variables

I was looking at the CAS progression pathways, and noticed that in column 2 (Programming and development), it has selection (if) before variables. 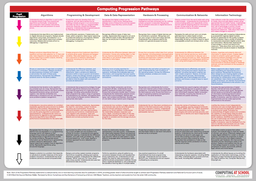 I realise (from talking to the author), that the colour bands and the arrows were added with protect, and should be ignored. They were added for an era that was obsessed with levels, the day before levels were abolished (for key-stages 0-3).

As a lot of teachers still teach in the order that is in this document, I was wondering: Is it possible to teach selection (if) before variables.

I am asking this, as I am creating a dependency graph, so that I know what has to be taught before what.

When I teach Python, I teach both much later, after iteration, procedures, and functions.

From a practical standpoint, rather than a theoretical one, there are at least two pedagogically defensible ways to do this. Spiral curriculum, and Scaffolding

Use a Spiral Approach

I won't assume that you never mention variables early with this approach, but you just don't teach all that needs to be known at the first introduction of variables (or any other topic). To teach like this you mention things that need to be known deeply early on, partly to introduce terminology, but partly to permit simple uses in which deep knowledge isn't needed. Then, for example, variables but without reassignment could be used in setting up some sort of selection or iteration as your lecture focuses on those ideas rather than the variables. At any given point in time students know a little about a few things and a lot about some other things. Then, in the next cycle you go a bit deeper in some topics but also introduce, very lightly, other topics.

The implication is that a student never needs to completely understand any given topic the first time it is presented as it will be seen again. Everything is reviewed constantly in such a course.

For purposes of this particular question, a variable could be initialized somehow and then used within a selection structure. The student need only have the idea that the variable refers to a value and can be thought of as a temporary name for that value.

Teaching a course in a spiral way requires some pre-planning, of course. It isn't enough to put each important topic into the syllabus only once. Neither is it enough to expect that every student will get a lot out of the first introduction and you don't, therefore, need to obsess that everyone is on the same page before moving to the next topic.

An independent way of teaching is to have students first programming experiences done within a pre-defined richly endowed virtual world. The world is constructed so that interesting things can be done early without necessarily building up everything from the beginning. Often these world are simulations. For example, in Karel the Robot and its successors, programs consist first of writing sequences of statements to direct an existing robot. The robot's capabilities are built in and the student simply invokes existing functions/methods to achieve some complex effect. Next the student learns to write methods or functions as just abstractions over some sequence of such pre-build actions and other actions already built by the student. In this way it is functional abstraction that is the first real topic of importance. You can introduce variables or not, and you will certainly do so when you want several robots acting together. But these variables are just object references and little needs to be known about them, including whether they can be reassigned or not. Selection is certainly a reasonable topic in such a world, as is iteration, polymorphism, recursion, or whatever you need to teach.

However, careful thought needs to be given to the characteristics of the simulation world. How rich is the environment. It can be simple, for example, and still be Turing Complete.

Both of these techniques are very powerful and have been used by many instructors over a long period of time. Of course, they may be combined to good effect.

The first 6 or 8 days of the year we work in Jeroo instead of straight Java (there's a Python mode as well). It serves as a very quick introduction to syntax, ifs, and while loops. I've found it helps when I can go back later in the year with "remember in Jeroo when..."

What Jeroo doesn't have is variables. You can't do things like loop 5 times. You can only loop or if while a Jeroo hasFlower(), isFacing(EAST), or something like that.

They're not directly using variables, although they're using boolean conditions. I've found that starting with methods like hasFlower() makes the idea of x == 2 easier to wrap their heads around when we get to it.

We only spend a few days in Jeroo because students start to get frustrated with what it can't do. You can't tell a Jeroo to loop a set number of times. You can't ask a Jeroo what column or row they're at. You can't ask them how many flowers they have. Any of those frustrations work really well as a hook into why variables are useful.

This year I managed to present both functions and if-then-else before variables to my (total beginners) students. We're using Processing.

Exercice for if then else : draw a square on the screen, and a circle for the mouse pointer. Circle is red when inside the square, green otherwise.

Well, mouseX and mouseY are framework variables, actually. We also constants (final), both global and local, so the students get familiar with the notion of scope. A bit later, parameters for functions (drawing the same shape at different places) are introduced. And then, "real" variables representing a user-changeable state (say, last position where a click occured).

A better example, if really dont want the coordinates variables:

A more elaborate example is drawing a clock with three needles. Makes a strong motivation to introduce variables for auxiliary computations.

PS: some readers are not familiar with Processing and are too busy to have a look at the documentation, so :

Here is a link to a list of programming languages that support functional programming: https://en.wikipedia.org/wiki/Category:Functional_languages

A list of pure functional languages can be seen at this link: https://en.wikipedia.org/wiki/List_of_programming_languages_by_type#Functional_languages

Here is an example functional programming exercise in javascript that I found: https://hackernoon.com/challenge-program-without-variables-javascript-bee89a41455e

Not the answer you're looking for? Browse other questions tagged best-practice lesson-order or ask your own question.

5
Uses of selection in programming (if, switch etc)

9
How is your teaching affected by how you learned?
11
Can sharing learning stats be beneficial to guide beginner students?
15
How to teach competitive programming?
10
What should a teacher do with information about plagiarism before the final submission
5
Working with students with specific secondary skill
6
Good, Motivating Examples for Algorithmic Complexity
11
Order to teach looping constructs in a non ideal language
54
How do you teach something when you don't know it yourself?
7
Students' confusion over C structure members and structure variables