How do you assess students' understanding of abstraction?

We've just uploaded a video of a presentation Simon Peyton Jones and I did about Project Quantum to CAS TV. Project Quantum is an attempt to crowd-source low-stakes formative assessment items for computing; we've just over 5,500 questions at the moment.

I boldly (and perhaps erroneously) claim that there's no bit of the computing curriculum for which we can't create multiple choice questions (MCQs). Note, this is rather different from claiming we only need to use MCQs to assess learning in computing, which is very far from what I believe.

My colleague Pete Kemp remarks on the Facebook that he's "still waiting on a Q for abstraction that isn't about definitions...". Here's what we have on the Diagnostic Questions site at present (free registration required).

So how do you assess whether your pupils understand, or indeed can apply, abstraction? Could you knit this into an MCQ?

Examples (of far from satisfactory questions) from https://diagnosticquestions.com/Questions?CurrentSubjectId=1688&OrderBy=Newest&IsByStudent=False All CC-SA 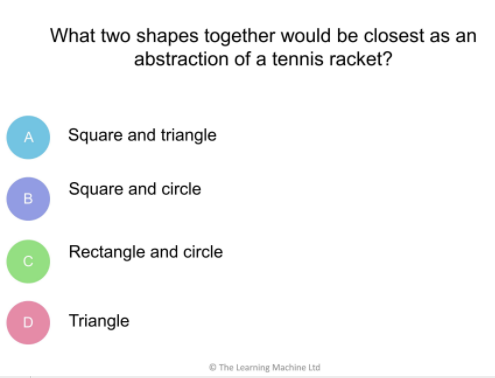 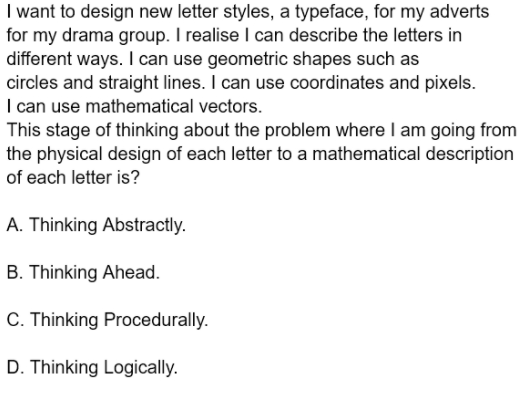 This question is difficult on many levels. I seems to me to be a land mine of misconceptions and has the possibility to lead to poor teaching practice.

I don't believe that a single, or even a small number of MCQ could capture the student's understanding of abstraction or any similarly deep concept. I think that if you had quite a lot of questions (say 20-50 of them) you might be able to get a handle on it, but it would take very careful cross evaluation of the answers given to be able to say with any confidence. Getting a single question wrong likely tells you almost nothing. And that, of course, makes MCQ less valuable for its main use - quick and easy evaluation.

I could, on the other hand create a bunch of questions that start to get at the student's understanding. The ones I'd like to use are short response questions, but some can be simple choices.

Assuming that the student have a common language background, something like "Is java.util.List abstract or concrete?" "Is java.util.Collection more or less abstract than java.util.Map". One choice for the answers needs to be neither of course.

You can show code fragments and ask whether they implement an abstraction properly or not. But a follow up "why or why not" gives you better information. And some of those questions would necessarily be a bit long to be meaningful and thus take some time for the student to evaluate.

"How can functions be considered abstractions?" Well, that was poorly stated, since a single function is concrete, not abstract, so you need to be careful: "How can the idea of a function be considered an abstraction?" is better. You could probably give a few suggestions for answers to this to turn it in to a MCQ, but it would be hard to come up with four, of which three were viable and yet not correct.

However, I've only hit the surface here and only explored a very small part of the abstraction space in computing.

Caveat: I never had to teach or evaluate a hundred or more students at a go. My classes were always small enough that I could use better evaluation techniques than MCQ, though would be likely to use a few in a larger assessment that allowed the students more creativity. If you do have to evaluate 800 students I hope you have help. If you don't something is deeply wrong. I note that Harvard CS 50 is run by a team of about 80 people, with quite a number of roles. I hope that each student has some individual person responsible for them. It isn't the professor.

My initial "just say no" is to the idea that you can completely evaluate a student with MCQ, not that they can't be useful, dangerous drug though they are. And note that I have the highest respect for Simon Peyton-Jones.

I think multiple choice questions are highly effective for measuring awareness of facts. I see them as much less effective for determining understanding of ideas.

Looking at the specific questions you've posted, I think both of them are relatively poor. For example, when looking at a tennis racket, I suppose your intent was probably that "rectangle and circle" would be the correct answer. However, that's looking only at the outline of the racket. To a tennis player, the two parts that matter are the strings (which form squares) and the ball that it hits (a circle). So, rectangle and circle might be a good choice if you're thinking primarily in terms of computer graphics, but square and circle might be a better choice if you think in terms of a tennis racket's actual purpose.

Shapes, aren't really much of an abstraction. Shapes deal purely with the physical embodiment of the device. To test for abstract thinking, you need to start by thinking abstractly yourself.

If I were going to try to do this with multiple-choice questions, I'd probably have two in a row that contrast concrete and abstract thinking:

On a physical level (the shape of the concrete implementation), which of these most closely resembles a tennis racket?

On an abstract level, which of these most closely resembles a tennis racket?

In the first case, the correct answer is '2'. A tennis racket is shaped like a large lollipop.

Fundamentally, I question the notion that you can test to see if students understand the idea of abstraction beyond a superficial level, even if you don't restrict yourself to asking just multiple choice questions. It's a little hard for me to articulate, but I sort of feel the best way to learn + get feedback on whether you understand abstraction is to actually try tackling a large, novel-ish problem and discuss your design decisions with a more experienced dev (or, if self-teaching, learn the hard way why some decision was a bad idea later down the line).

Nevertheless, here are some ideas (with the caveat that I have never once designed and administered a multiple-choice question style thing which means it's entirely possible I have no idea what I'm talking about).

These are all more CS-y and math-y then your example questions, but I figured you might as well address the skills you're after in a directly applicable setting instead of beating around the bush.

Your tennis racket question, is not good. As tells as that is is abstraction, then focuses on the form, when the most important aspect of a tennis racket is its function. Therefore the answer is non of the above (those are all implementation detail, and you asked for an abstraction). A good abstraction is hitty thing.

The 2nd question, is very long, and can be summarised as, “guess the word I am thinking of”. While all answers are plausible, non are obviously wrong. Unless I grep my notes and see that “Thinking Abstractly” is the only one of these phrases that the teacher has used.

This is my attempt at an abstraction question.

Based on what I learnt on page 24 of Hello, World issue 3.

Which of these is an abstraction of a tennis racket?

The best way to find out is to give programming problems, or similarly complex design problems, where you can look at the details of the solutions they create. I give lots of "lab" assignments where the students have to write programs based on a problem statement from the textbook. Part of the answer is: "Are they using what we just covered in class?", but the vital part is: "Are they gaining knowledge over time and learning to assemble things with increasingly complex structure?"

Some students clearly learn general concepts like how to define classes and use them sensibly, while other students struggle with this, or even more basic concepts like how to use variables in one UI method that were set in another UI method. (Could be Console or Windows, doesn't matter.) Some students take the ideas of Relational Comparison and Boolean combiners and use them correctly, others struggle and try to create things by sticking together the code they painfully got to work in the previous assignment (which they are now trying to re-use for an opposite case).

In short, assessing whether students have learned how to abstract is bone-obvious. Teaching it is the hard part. We need to find ways to teach abstraction. My research has turned up very little except arguments over what the word means, or worse: whether to start teaching at high levels of abstraction, or instead teach how computers actually work, etc. (See other questions on this site.) Poor start on a very significant problem!

3
How to handle objections to the wording of test questions or answers?

3
Assessing programming skills of students under 18 years
5
How should students be encouraged to reflect and improve after summative assessment?
5
Encouraging Critical Thinking On Programs Before Students Write Them
7
What's the best way to assess programming?
4
Encourage students to learn and use advanced design
15
How can I speed up the construction of high quality testing materials?
1
How can I build up the understanding of a project?
13
How can you efficiently assess students web coding?
3
How do you distinguish jargon from normal language in explaining a concept?
5
Driven to Abstraction