The concept of an integer data type is not equivalent to the math concept of the set of integers. For example, in many programming languages the expressions 3. and $2^{10^{10000}}$ are math integers but (for different reasons) are not an integer data type. This potentially creates confusion for students in the age range of 8-16 years old who may be learning both the math and CS concepts of integer at once. What are effective ways to have students experience the distinct concepts so they reinforce each other rather than create confusion?

This might be an interesting way to do it, but here goes.

Also, by now hopefully they've realized that the world of math doesn't directly translate to some of its uses. Math is a very abstract thing, though it describes many things remarkably well. Pure math is very different from most math they've seen, and I think they understand the difference, for the same reason they understand the difference between x = x**2 and $x = x^2$. It's a different context, so it has a different meaning.

If your students are mathematically inclined, you could simply think of the variable type as a constraint on the value contained inside of it. 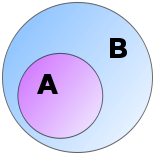 Whether this explanation is useful would depend on your students' proficiency with mathematics and set theory. For younger years, you could simply skip the subset discussion and show a Venn diagram to represent the idea that a float can be an integer, but an integer type can only represent an integer—not all floats are whole numbers, but all whole numbers can be floats.

The issue of large integers not being represented by integers in some languages is more difficult to explain without stating the way that integers are stored. In many curricula, binary representation of integers is covered quite early, and if that's the case, explaining why int types can't hold extremely long integers is straightforward.

Show them how integers are actually represented in a computer. This has the benefit of also helping to explain integer underflow and overflow. In addition, it provides the opportunity later on to actually write a program that can convert from one number format to the other.

The two's complement system is not very difficult, and provides a good insight to some of the tricks that computers use to do basic operations. As a CS student, I think that these "go behind the scenes" opportunities help to generate a better appreciation for all the interesting problems students will encounter in the future in CS and Computer Engineering.

Not the answer you're looking for? Browse other questions tagged high-school mathematics data-types or ask your own question.

7
Introducing image processing - Should I teach the math
9
Teaching "math function" vs. "CS function"
26
How do I teach "math equality" vs. "CS assignment" vs. "CS equality logic operator"?
7
Teaching syntactic sugar
7
Breaking down the operations when auto-casting gets complex
15
Teaching a blind high school student
4
Merits of teaching VCS as enrichment
18
How do you teach Big O to high schoolers with varying degrees of math exposure?
5
Discrete function is also a math function?
3
How useful it is for math student to learn programming to find proofs or counterexamples?