How to integrate CS when learning about DNA/RNA/protein

I'm looking for activities that can integrate computer science into lessons about DNA, RNA, and proteins in a middle school (ages 12 to 14) science class. Our school is using the NGSS and CSTA standards. The students understand a few basic concepts about these topics, but they're generally beginners.

Building off Bennett Brown's answer about creating an "alphabet" with DNA...

It is being researched how to efficiently store data in DNA. Here's some thoughts you can cover:

I could keep going (I'm just a bit excited about this field), but it would be well worth the doing to explain the various encoding systems used in research, and let them explore - who knows, they might come up with a great system of their own! I will add links as I have more time.

Create a DNA-like representation for the alphabet

This activity establishes a background experience that can later be used when teaching that DNA and computer data are sequences of discrete values. Each student picks three colors and creates a 27-character table showing all permutations of "codons" of the colors, akin to the 4^3 DNA codons representing amino acids. This activity was implemented in a U.S. grade 7 science classroom. An example of the student work is shown below, although the printed worksheet was revised after the pilot to make more explicit connections to both computer science and genetics. 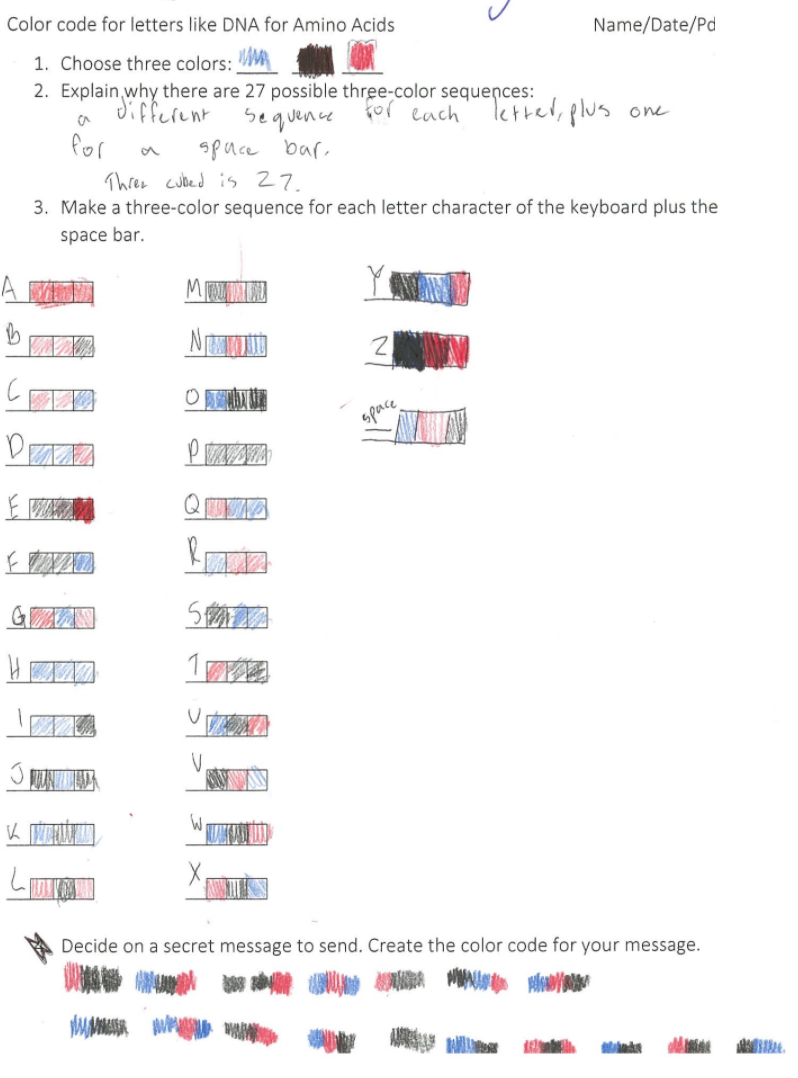 Code.org, partnered with Project GUTS, has a CS in Middle School Science curriculum which includes a Life Science Module. This uses StarLogo Nova for modeling and includes unplugged activities as well.

This activity has been used in one of the endorsed CS Principles curricula and is often implemented by AP bio teachers. Nuances in how to teach phylogenetic trees and the impact of these choices on student understanding of the biology concepts is reported in Smith 2013.

Not the answer you're looking for? Browse other questions tagged curriculum-design cross-discipline biology or ask your own question.

18
How does one create a balanced AI curriculum in light of the popularity of Deep Learning?
6
Self guided learning about audio processing
3
Learning about the Blockchain
7
Opportunities for Interdepartmental Collaboration
24
How important is learning Binary for first-year college students?
6
How can I set up and deliver a Computer Hardware Course for the first time?